Tell me who’s been fooling you?

Who’s been fooling who?” Dereck & the Dominos

The key points are blindingly obvious. 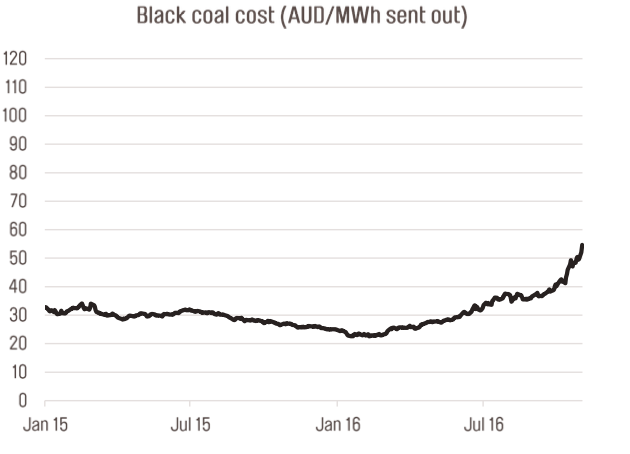 The same presentation showed that AGL’s contracted coal position by 2019 is a fraction under 9 mt, and at that time contracted coal volumes were less than requirements, so some spot buying. The contracted position(at the old price) will continue to fall away raising AGL’s average cost.

We anticipate that by 2022 the contracted cost of coal could easily be 20% higher than today and further that the more coal AGL takes under its contracts the higher the contract price will be. Even so it will have to contract further.

Newcastle export thermal coal prices are around US$85/t now and five year average is around US$77/t. The export price is very dependent on demand from China. Demand from China largely depends on policy towards local coal consumption and electricity demand. Electricity demand in China is up this year for the first time in 3 years. We see that as a blip in a longer term trend of China sharply reducing its electricity intensity (electricity consumed per unit of GDP).

NSW steaming coal runs at about 20% ash content whereas export coal is at 14%. All things considered we think a reasonable recontracting price in 2017 is around US$65/t real. Say US$73/t in 2022 or maybe a US$75/t average over the five years to 2027. Our estimate is right in line with Newcastle thermal coal futurs which are at US$76/t for 2022.

That’s around A$100/t. Liddell uses 0.42/t coal per MWh of production putting the coal cost at $42/t but then there is transport and other overhead cost to add. Liddell gets most of its coal by conveyors which have low running costs relative to rail.

We are missing a few bits but still we think all up coal costs by 2022 of Liddell will over A$70 MWh and could be higher.

There are various reports of the capital investment required at Liddell. We are going to use $300 m. We are going to ignore the estimated future closure costs of Liddell but we note that in dollars of the day the combined liability of Liddell/Bayswater is over $800 m ($500 m in NPV terms). We also note that the shared liability, the shared conveyor system, the shared coal contracts, make separating Bayswater and Liddell a lot less easy than standing up in Parliament and issuing a “command economy” decree.

Total employment at Bayswater and Liddell is about 600 and we think a working estimate for Liddell is 250-300. If we work at total employment costs per FTE of say A$150 k (likely on the low side) or around A$37 m and add in other overheads we can easily see total overheads per year of around $70 m. On those numbers around $87 MWh is needed. However the IRR is hugely sensitive to the price assumption. We have no confidence in those numbers we just wanted to use the as background. If they are half correct Liddell extension will lose money if the futures price of $72 MWh for 2021 turns out to be the correct number. We expect the cash fuel/coal cost to be around $70 MWh.

Baseload futures are in backwardation. The market expects the price in future to be less than today. That itself is a negative for investment. However the more important point is that $72 MWh indication for 2021 is not enough to justify new plant. It might be enough for wind or PV alone but no way could you also justify the required firming capacity for that price. 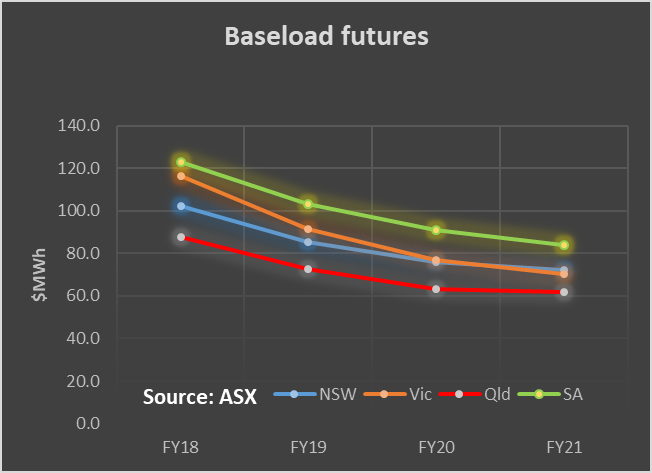 ORG’s Darling Downs combined cycle plant in QLD cost around $700 m for 630 MW and takes about 40 PJ of gas per year if run hard. Using that as an example a 1200 MW gas station complex in NSW, almost certainly not on the Liddell Site would take around 80PJ of gas per year or 1600 PJ over 20 years. The capital outlay would probably be around $1.5 bn.

The only realistic source of gas for this at the moment is imported LNG from AGL’s proposed Cribb Point terminal. That terminal which has a land side cost of say $250 m could import 100 PJ of gas per year.

We suspect that this has been in the back of AGL’s mind for some time, but that now AGL will be forced to accelerate its plans after being pressured by the ham fisted Federal Govt.

Right now the gas would cost around $9 GJ making the electricity production cost over $100 MWh but if the oil price goes up that cost could conceivably rise to $150 MWh.

This combined plant could be backed up by a more modern smaller gas plant such as Panda’s US$1 BN “Flex Plant” Temple, Central Texas. According to the marketing blurb

‘Built on a 250-acre former sunflower field, the 758-MW facility is the first Flex Plant in Texas. As one of the cleanest natural gas-fired plants in the U.S. fleet the facility operates at 57.5% overall efficiency and can syrnchronize to the grid in ten minutes, reach an emissions-compliant 60% basedload in 20 minutes and arrive at full power in an hour” 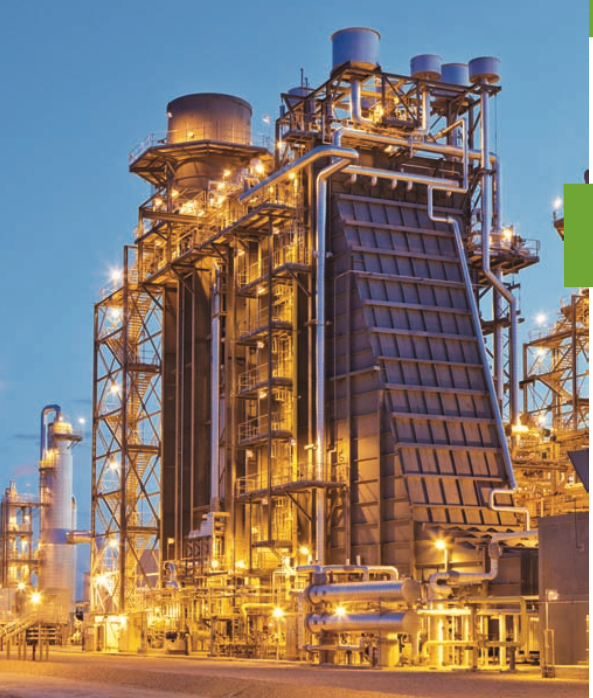 Of course the irony is that this plant, despite very low USA gas prices, went broke within 3 years, due to even lower electricity prices in Tx (and too much debt).

And that’s the problem with investment in gas plant in Australia. The electricity has high marginal fuel costs and the plant takes time to build.